To share your memory on the wall of Victor Wisniewski, sign in using one of the following options:

Victor was extremely proud of his Polish heritage but even more proud to say he was an American. He loved polka dances, the Phillies and his favorite player Greg Luzinski, the Eagles and Ron Jaworski, riding his Harley and his favorite pastimes fishing and boating. He had a wonderful personality. There wasn’t a person who met him that didn’t like him.
He was survived by his wife Mary J. (Smolen) Wisniewski for a few hours after his death. He is survived by his daughter Melanie wife of Dennis Carr, son Gene, son Christian husband of Jacqueline. Grandchildren Alexa, Nicholas, Alec, Austin, Julia and Aidan.
He is also survived by his sisters Halina and Stella. Also, half-sisters Barbara Kurtz and Bogda Starvarski. As well as many nieces, nephews, great nieces and nephews, great-great nieces and nephews and one great-great-great nephew.
Victor is predeceased by his son Stanislaw “Stas”, sisters Danusia and Wanda, stepfather Frank Lesinski and half-brother Richard Lesinski.

Pop is also survived by the friends of his children whom he called his own.
Na zdrowie Pop!
Read Less

To send flowers to the family or plant a tree in memory of Victor Witold Wisniewski, please visit our Heartfelt Sympathies Store.

Receive notifications about information and event scheduling for Victor

Provide comfort for the family with a meaningful gesture of sympathy.

Show you care by sending Flowers

We encourage you to share your most beloved memories of Victor here, so that the family and other loved ones can always see it. You can upload cherished photographs, or share your favorite stories, and can even comment on those shared by others.

Posted Jun 07, 2020 at 10:13pm
Good evening,
Please accept my most heartfelt sadness at the passing of our Victor and Mary.. We had a very intimate religions relationship.
When I was sick with cancer, at old church, (now the Ignatian Day Chapel) they sat behind me and said prayers on my behalf... We both served as EM at Saint Therese Church since 2004... They did not even know me at that time. We shared a deep religious belief.. They asked I attend his son's funeral as a Eucharist Minister... Of course I said yes !!!
When they became ill, I was able to give back their prayers by bringing Eucharistic and sharing some silly stories and bringing the Bulletin to them weekly... Even recently, sharing the print out as this virus attached our world... we spoke, laughed, prayed, and shared advice about life in general.... We were both of Polish descent and shared many of our Northern preferences and ideals, so I think that had much to do with our comradery.
They never let me leave without sharing a treat with "Tiger". I will miss these moments without them. They left this world as they were meant to Holding Hands as they were received with grandeur to their final resting place.
God Bless you Victor and Mary as you are now without pain or worry. Amen, Patricia 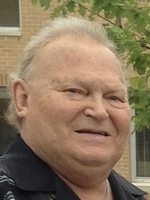