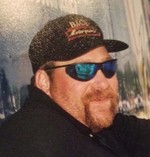 On Saturday, December 7, 2019, James (Jim) Paul Bird passed away in Mooresville, NC at the age of 58. Jimmy was born on March 3, 1961 to Amos and Eleanor Bird in Lawrence, Massachusetts.
Jim was an avid race fan and worked for many years in the motorsports industry fabricating race car bodies. He worked for BACE Motorsports #74 Team during their NASCAR Busch Series Championship years, 1995, 1996 and 1997 with drivers Johnny Benson and Randy Lajoie and served as the gasman for the #33 with driver Tim Fedewa. In addition, he owned his own company, Bird Fabrication and he worked with several races teams that competed with regional race series.
Jim was preceded in death by his father, Amos and his mother, Eleanor. He is survived by his brother, Steven Bird (FL) and nephews, Jasun Bird (AR) and Jamie Bird (FL).
A celebration of life will be held in the Spring at Hudson (NH) Speedway where Jim will take his final laps in a race car capturing his last checkered flag. He will be laid to rest in the Bird Family Lot at Mt. Vernon Cemetery, Boxford, MA. In lieu of flowers, you are asked to donate in Jim’s name to the American Diabetes Association. www.diabetes.org