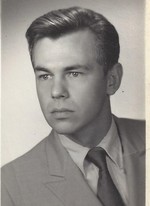 Andrew Geza Juhasz, age 75, of Troutman passed away on Tuesday September 24, 2019. He retired in 2003 and spent his career working as an architect in New York City, he was a veteran of the United States Airforce, enjoyed intarsia and other forms of woodworking, loved his family, his dogs and his cars. Preceded in death by his brother, Geza Juhasz. Survivors include his wife of 51 years Lucy Ann Juhasz of Troutman; son, Andrew (Cristina) W Juhasz of Mooresville; daughter, Barbara (Matthew) Juhasz Vitiello of East Hampton CT; brother, John Juhasz of New York; 5 grandchildren.
In lieu of flowers, donations may be made to Saint Jude’s Children’s Hospital.